Basic Original Fire and Fury (a.k.a. BOFF) is considered by many experienced wargamers to be the most realistic, playable, and enjoyable set of grand-tactical American Civil War miniatures rules on the market, and for many of us it was only a question of time until a Napoleonic variant of the successful game system would become available.

When Richard Hasenauer’s rules appeared in 1990, they set an industry standard for clarity, attention to detail, design and layout. Spectacular photos, easily understood charts and graphics, and well-written texts made it a joy to learn to play this simple yet incredibly realistic simulation game, even if you were not a native of the English language.

Fire and Fury was, and probably still is the most in-period simulation of the American Civil War battle. BOFF is the reason why so many wargamers all over the world pried tens of thousands of American Civil War miniatures off their old figure stands and gladly re-based them for this excellent game. Not surprisingly, Fire and Fury soon spawned several variants for other conflicts of the Horse&Musket period of warfare, including the Franco-Prussian War (published in Wargames Illustrated № 140) and the Napoleonic Wars (WI № 143). The idea of Napoleonic Fire and Fury appealed to over 1600 wargamers who joined a supporting discussion group on the web and acted as playtesters for The Age of Eagles which was published in 2005 and sold out immediately.

Although The Age of Eagles owes a lot to BOFF, it is not a rehash of the original ACW simulation. The good news is that Wilbur Gray has successfully changed the historical flavor of the game by adding a few healthy ingredients.

In the late 1970s Jim Getz and Scott Bowden, developers of the ground-breaking Empire III miniature rules, pointed out that „each major body of troops, known as a maneuvre element (ME), has a zone of operation which is defined as the ground area it occupies“, and they went on to say that „no voluntary deployment or movement may be made that would cause the zone of operation of an ME to overlap the zones of operation of other friendly MEs“. Interpenetration of tactical maneuvre elements is dangerous, because it makes the bunched-up troops an excellent target, causes collisions when battalions attempt to form line from column, hampers the effective use of firearms, and creates disorder which can lead to panic. 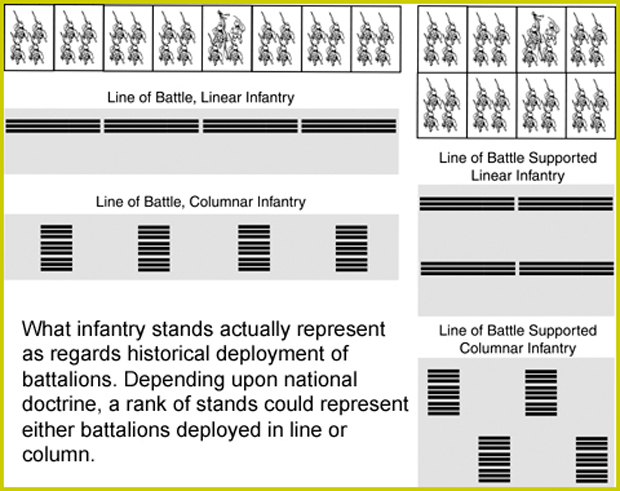 It is important to keep the concept of brigade zones of operation in mind when looking at figure stands now used by many popular grand-tactical miniature rules. At first glance, these stands are too deep to be realistic, because a French infantry battalion in attack column would only be 5 mm deep at the typical ground scale of 1 mm on the table representing over 4 meters of actual terrain. The illustration on page 31 of The Age of Eagles rule book indicates that the 25 mm deep infantry stand actually represents a section of an infantry brigade’s zone of operation, not a single unit in line or column. Napoleonic infantry battalions were deployed in a staggered formation „en échelon“ at the brigade level (called „Line of Battle Supported, Columnar Infantry“ in the illustration reproduced above). In 1805 the typical French infantry brigade of four line infantry battalions and one light infantry battalion occupied a relatively square plot of ground approximately 300 meters wide and just as deep. Intervals between the skirmish line, the first Regiment in line formation, and the supporting regiment in columns of divisions, were necessary to minimize the danger of pass-through fire aimed at one line of troops inadvertently hitting the supporting lines. As can be seen in the illustration, formation changes of battalions within the brigade zone, from column to line or line to column, have no effect on the shape or size of the brigade zone itself.

While an 1806 Prussian infantry brigade in supported line occupies the same ground area as a French infantry brigade en échelon, the two formations operate very differently. The Age of Eagles rates infantry of all nations, except France as Linear Infantry from 1792 to 1808. Linear infantry has the advantage in firepower, but is slow and cumbersome.

French infantry of 1792 to 1804, and 1812 to 1814, as well as other nation’s infantry from 1809 to 1815 is considered Columnar Infantry which moves faster and is better articulated than linear infantry, but sacrifices some firepower.

British/KGL 1809 to 1815, British Allied 1815, French 1805 to 1811, and 1815, Davout’s Corps in 1812, the French Old Guard and Middle Guard at all times, and the French Young Guard at all times except 1813 to 1814 are considered Impulse Infantry, the most powerful combat doctrine, combining the advantages of linear and columnar infantry doctrine.

Combat doctrine is the novel and refreshing game concept which sets The Age of Eagles apart from its competitors. Without the combat doctrine parameter, previous wargame rules have resorted to superhuman „Old Guard“ morale ratings, arbitrarily inflating the firepower and melee ability of French Old Guard troops, in the vain attempt to give these wargame units the same edge in combat that their historical counterparts reportedly had. This procedure was never quite satisfactory, but most Allied players grudgingly accepted it for want of a more realistic approach.

The Age of Eagles rates most guard infantry, and many grenadiers as Elite infantry for firepower and morale purposes. Using the combat doctrine parameter, preußische Garde and Garde-Grenadiere, as well as converged Grenadiers 1791 to 1807 are considered elite linear infantry with the same firepower and initial morale level as French Old Guard infantry. The difference is that Elite infantry deteriorates from „fresh“ to „worn“ when brigade effectiveness drops to 70 percent, and deteriorates again to the „spent“ level when the 40 percent mark is reached, whereas French Old Guard never achieves the „worn“ level, but drops directly to „spent“ at the 40 percent point. Thus, while French Old Guard are considered to stay „fresh“ longer than other elite infantry, their resolve can and will fail at the same level when casualties mount.

In addition to its freshness bonus, French Old Guard infantry has skirmish ability which the Prussian elites lack, and it is rated as impulse infantry which combines the advantages of the linear and columnar combat doctrine. In The Age of Eagles French Old Guard brigades outclass other guard formations, because of the combined advantages of combat doctrine, brigade effectiveness, and skirmish ability, and not because they are rated a superhuman 7 on a morale scale of 1 to 6.

Campaign gamers will be happy to know that The Age of Eagles introduces a simple and convincing point system to calculate the strength and average troop rating of a brigade. Using this system, historical brigade strengths and known combat ratings can be easily converted to create realistic table-top scenarios. Jim Getz and Scott Bowden put an enormous amount of detail into their Empire III army lists, using ten morale grades to differentiate Old Guard, Guard, Grenadiers, and Elites at the upper end, and Conscript, Landwehr, trained Militia, and untrained Militia at the opposite extreme. In The Age of Eagles the top four morale grades are subsumed as „Elites“, the bottom four are „Conscripts“, and everyone else is „Regular“. Three morale grades and three different combat doctrines provide 9 unique combat effectiveness ratings in The Age of Eagles, compared to 10 morale ratings in Empire III. Enough to differentiate French Old Guard from British Guards, and Prussian Guards like Empire III does.

Like BOFF, The Age of Eagles requires little to no bookkeeping, because all game-relevant unit statistics are on a label underneath the brigade command stand or artillery battery. Unlike other wargame rules, which use cryptic labels like „1B/A/R [10D] PrGN“, the labels used in The Age of Eagles are easy to read like „Ziethen / 8th Silesian Landwehr C 7/6/4“, being a Conspript Brigade of Ziethen’s 11th Prussian Division. The 8th Silesian Landwehr has a strength of 7 stands at the start of the Battle of Dresden. It becomes worn when strength drops to 6 stands, and is spent, when it has only 4 stands left.

The Age of Eagles recommends the same figure stand sizes already popularized by other grand-tactical wargame systems, which also happen to be Kompatibel mit popular brigade level wargame rules. If this were not the case, it is very likely that miniatures all over the world would be force-marching toward the sound of rebasing.